I complain... a lot.  about our town's lack of a Panera.  It's probably good for our budget that we don't have one.  Cinnamon crunch bagels, bread bowls, cinnamon chip scones, and that broccoli cheese soup.... I'm drooling right now.

I'm pretty skeptical about restaurant-copycat recipes.  They just don't taste the same.  However, when I saw the fat content of this "Panera" broccoli cheese soup, I knew it had to be the real deal.  Plus, I loved that it called for cheddar cheese and not Velveeta as well as fresh broccoli and carrots rather than frozen.  That's supposed to make me feel better about all the butter and cream we will be consuming in this soup.  I'm trying not to feel guilty... because my house smells amazing.

I put Caleb down for his nap, tried to get Ben to nap, failed, and then had Ben as my helper in the kitchen. 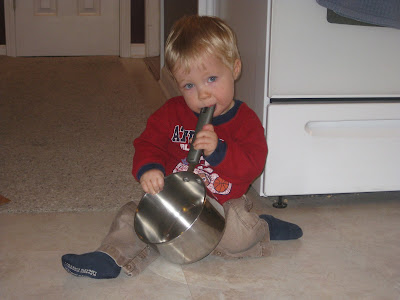 No, I did not actually use this pan for the soup; but he is so stinkin' cute. 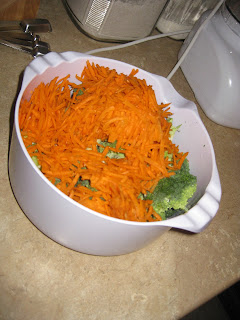 I shredded and weighed the veggies.  Wow!  This DOES make me feel better about the whipping cream and sticks of butter I put in the soup. 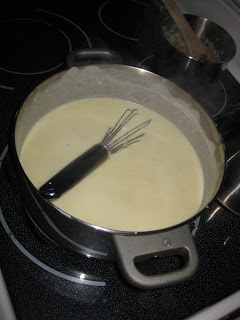 I made the base according to the directions in the recipe, except I used whipping cream and milk instead of half-and-half.  It's what I had in the fridge, and I'm all about using what I have. 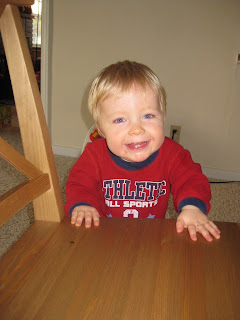 My very eager helper followed me everywhere.  If he weren't already nicknamed "Goat," he would be "The Shadow." 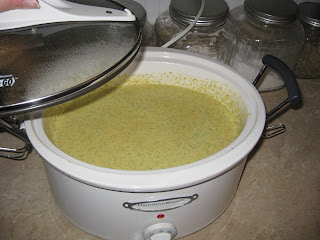 After pureeing the soup according to directions, I put it in the crockpot on low to continue softening the veggies and melting to cheese.  I forgot the nutmeg at the end.  Whoops.  Oh well.  You really can't mess up with that much butter and cream.
My other big whoops was that as soon as I had spent most of naptime making this soup, I realized we were going to Mr. Frank and Mrs. Anna's house for dinner. (Insert palm of hand hitting forehead here.)  And we had steak there.  And it was delicious.  And I brought the soup as evidence of my imperfection.  And I laughed with Anna about it. really. hard.
Hope some of you take advantage of broccoli being so cheap right now ($1/14oz. at Aldi) and enjoy a pot of Panera Broccoli Cheese Soup.  Just make sure that someone else isn't already making your dinner.
Posted by Krista at 3:58 PM

Email ThisBlogThis!Share to TwitterShare to FacebookShare to Pinterest
Labels: Recipe