The Little Boy Who Cried, "Mommy!" (Why parenting is not for sissies)

Often in the morning, I'm awakened from a dead sleep by a little boy yelling, "Mommy!  Come quickly!  Hurry, please!"  The first times this happened, I charged into Caleb's room determined to fight the monsters in the closet only to be met by a little boy who was just really hungry for his breakfast.  Over time, I've taken the yelling less and less seriously.  In fact, he doesn't really do it anymore since it has become so ineffective.

Early this morning, I heard happy sounds coming from the bedroom so I decided to let them be brothers for a while.  Caleb likes to read books to his little brother.  Ben likes to throw things out of his crib at his big brother.  Big time bonding.

Then the room went quiet for a while, followed by both boys yelling, "Mommy!  Mommy!"  I didn't run, but I did finally get out of bed.  Right now my morning sickness is worst first thing in the morning, and I do a lot better if I eat first.  My plan was to get both boys up and make my toast so that we could all have a happy day.  Then I opened Ben's door...

The stench was overwhelming.  As I looked around the room, I saw my son's dirty diaper flung onto the carpet, poo sitting on the floor, poo finger-painted all over the crib, and my baby covered in (You guessed it!) poo.  Caleb was just watching his half-naked brother in horror/disbelief.  (You'll notice there are no pictures.  There just wasn't time.)  This has never happened before.

I started yelling for Teacher Man.  There was no way I was braving this mess alone.  No. way.  For the next half hour, I cleaned Ben while Teacher Man attacked the mess in the crib.  Then together we cleaned the carpet and started the load of "poo laundry."  Ah, cooperative parenting at its best.

We both breathed a sigh of relief when we were done and the windows were opened.  It was one of those moments that we'd heard of from other parents but never thought we'd have to experience ourselves.  Then in the remainder of the day, Ben managed to spill coffee, dump milk, and as I was trying to write this I was interrupted by Teacher Man's cry for help... Ben just pooped in the tub.  Fabulous. 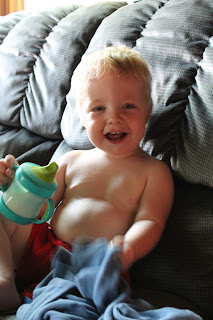 We're so ready for bedtime tonight; but before I close, I have a request for you: don't judge me if you see that my son's diapers are duct-taped closed.  It's for the best.  For everyone.
Posted by Krista at 8:17 PM