The Ministry of Interruptions

I had a full week planned.  Teacher Man is back to school this week so I double checked the calendar to make sure that everything on it was doable as I juggled both kids, the house, my ever-growing pregnant belly, and all the activities of the week.  I carefully balanced each day so we could be home for naps, have plenty of homemade food, and a few special outings with friends.

Sigh.  You know where this is going, right?

Monday was my easy day... before I was given five gallons of fresh, organic Concord grapes.  No way I was passing those up so I decided to juice them while the little men napped.  Note to self: five gallons is too much to juice in two or even three hours, especially when your machine malfunctions.  It will take seven hours... and most of your sanity.  Add six errands to the morning, and you have a recipe for an exhausted, cranky pregnant lady.  Yep.  That was me.  What's more is that I had the day planned so I would ask no one for help, and the day ended with my parents taking Caleb out for some two-on-one time while I juggled Ben and the remaining grapes.  Humbling.  Good.  Not the smooth schedule I had in mind though.

Tuesday, I got up early to shower and say goodbye to Teacher Man on his first official day of school.  I had some picking up to do before our speech therapist arrived. One little problem though: through no fault of her own, she never arrived.  Not a big deal, just not the day we'd planned for.  We packed up the van and headed to the library instead and then had a spur-of-the moment picnic at Caleb's request, followed by a lot of tricycle riding around our nearby college campus.  A beautiful way to spend a lovely day.  A better plan that I'd had by far!

So Wednesday arrived.  I should have been prepared, but I wasn't.  With two gallons of grape juice on my hands, I was gearing up for an afternoon of grape jelly canning with a friend when a phone call came with a ministry opportunity I had to take.  You know those calls.  When the needs of another touch your heart in a way that tells you that you and no one else but you are to step up and fill that need.  I called my canning friend, and she readily and graciously took my children for the afternoon. Together this wonderful friend and I schemed to serve another in every way we knew possible.  And it was bliss.  Pure bliss to feel your gifts meeting another's need at just the right time.  No grape jelly was made, but I could care less.

Three days gone.  Nothing normal about any of them.  Surely I would get to keep my Thursday plans.  Surely I would be able to help with MOPS registration and have my family over for a big dinner.  Uh... yeah, that's clearly not the theme this week.  Caleb spiked a fever right after he went to bed, and Benjamin woke up at 2 a.m. with the same fever.  My night was full of children's Tylenol, bathroom trips, and waking up little boys from fevered nightmares.  That said, my day has been full of snuggling on the couch (Ben fell asleep next to me while I was typing this.), watching countless hours of PBS Kids, and offering food to little boys who could care less about fluids and calories.  These little fevers have also successfully canceled the plans we had for Friday too. 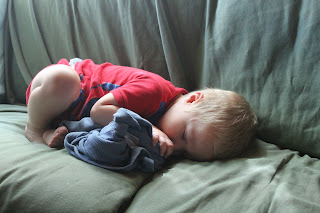 Pretty impressive, huh?  The funny thing is, minus the seven-hour grape fiasco on Monday, the interruptions and re-schedulings have not been a burden but a blessing.  Each time my plans get foiled, something better has replaced them.  No, I wouldn't choose for my children to be sick, for my friend to have to watch my children, or for a family get-together to be cancelled; but, in each of these situations, I rest in the fact that these interruptions are nothing less than the hand of God directing my steps and allowing for His will (and not my human plans) to be accomplished.  "In his heart a man plans his course, but the Lord determines his steps." (Prov. 16:9)  Can I get an AMEN??

So my afternoon continues, I have a few things I could do, several things I should do, but the one thing I will do is to be on the lookout.  I'll be counting the graces, looking for the hand of God that is clearly doing a better job of directing my life than I am.  And maybe, just maybe, I'll be able to pass that grace on to those around me.  Because my Father knows best, and His interruptions are far higher and better than my feeble plans.
Posted by Krista at 2:11 PM