The fussing has stopped so I think that means everyone is asleep.  I'll give this a try... 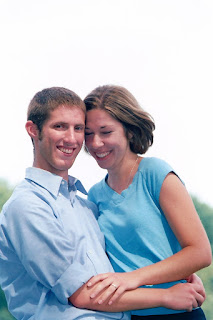 After my spring break was over, Teacher Man came to my townhouse for a visit.  Apparently some mutual friends of ours who were dating (and had been for several years) saw each other less than Teacher Man and I were seeing each other.  They wanted to know what was up.  At this point, so did I.  Teacher Man and I were making pancakes in my townhouse as we talked about all this, but we were not watching the clock.  My resident advisor came in promptly at midnight to let us know that Teacher Man would have to get out... immediately.  Grrr...  Is it just me or do they always come in at the worst moments?  I do know it was her job...

We had no choice.  We moved our conversation out to his little white Honda Accord in the parking lot.  I was freezing!  It was a cold March, and I HATE cold; but there was no way I was letting this guy walk away without figuring all this out in person.  After we were in the car, Teacher Man said that he could definitely see God working through us as a couple in the future, but he asked that I pray with him about our future as long as I needed to in order to know whether God would have us change our friendship into something more.

So we prayed.  Two weeks later, he could wait no longer.  I think we both had a peace about our relationship from the beginning, but God had confirmed in our hearts that we had a future together, each making the other stronger for the Kingdom.  Teacher Man went home for his spring break with a smile on his face. All I have to say is, "Thank goodness for cell phones!"  We talked for hours while he was at home about everything and absolutely nothing and made plans for our first "date."

Here's the romantic in my husband for you: he decided to take me to Chicago for our first date, but this was not just any trip.  Oh no.  Friday night we would picnic at my university before a concert and then head up to his mom's house for the night before leaving for Chicago the next morning to help build a house for the director of the private school where Teacher Man felt called to teach.  Talk about quality time!  After a picnic at the park ruined by rain and a concert at my university where the band was just NOT as good in person, we went back to my townhouse and drank Jarritos (Mexican pop) and talked.  He handed me a copy of My Utmost for His Highest and asked me to read it with him in the year to come.  So far nothing in the evening had gone according to plan.  Then when we arrived late to his mom's house, he informed me that we would be getting up at 4:45 a.m.  WHAT!?!?!  Yep.  Our ride was leaving at 5:30 a.m.  We'd need to be up early.  On a Saturday.  Yeah... I wasn't informed of that detail ahead of time.

But I got up.  I had a bigger smile on my face that he did, and we had an amazing day, talking with the director about his vision as we moved wood trim into his home and installed door handles.  Teacher Man told me at the end of the day that my willingness to scrape plaster off the floor of this man's home was one of the moments that confirmed his choice of bride.  On my side, I watched him and the director talking about the vision for the school, the lives it would change; and I knew within my heart that I wanted to serve the Kingdom alongside this man of vision and compassion.

We rode home in the back of the van with two other volunteers in the front seat and spent most of the time laughing,  probably from exhaustion.  Stopping at a Culver's, I heard a song on the radio for the first time and blushed because I felt like it was reading my mind.  Ever hear Chris Rice's When Did You Fall in Love with Me?

Teacher Man and I held hands for the first time on the last few miles of that trip, and I knew my life would never been the same.  A mentor in Argentina had once advised me to look for three things in the man I would marry.

1. Can you see your life calling fitting with his?
2. Does he draw you closer to Christ?
3. Are you physically attracted to him?

And in the first date, I saw Teacher Man holding me accountable for spiritual growth, encouraging me to serve the Body, and driving me to distraction by holding my hand.  Plus, let me remind you that he was (and is!) my best friend.  My confidant.  In fact, on several occasions, I would try to tell him something that I wasn't sure how he would take, only to have him say, "Krista, you told me that months ago when you lived in Argentina.  I've known that from Day 1!"  He'd accepted things about me that I didn't even remember telling him.

I'll also tell you that three weeks after our first date, I asked Teacher Man if he had a timeline for our relationship in his mind.  Girls, don't do this unless you're ready for it.  He flat out told me, "Well, I was thinking I would ask your dad for permission to marry you in August, propose between Thanksgiving and Christmas, and we'd get married next June after you graduate."  To which, I romantically answered, "I'm leaving the country to student teach in the spring.  I'll need a little more time to plan a wedding.  Could you move up the proposal?"To which, he calmly replied, "Okay." 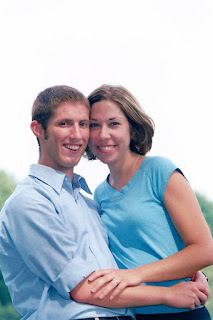 And that was that. Thus concludes my five-part story.  Someday, perhaps I'll get around to blogging more, but this is really where it all started.  Thanks for reading.  It's been fun to write this in the spring when everything around me reminds me of those precious days when the Lord was bringing us together.  Teacher Man proposed Labor Day weekend after talking to my parents in August, and we married the following June, completely according to plan.  Only seven months into our marriage while Teacher Man was still a junior in college, we found out we were expecting our first little blessing (not in our plan), but that is another story..