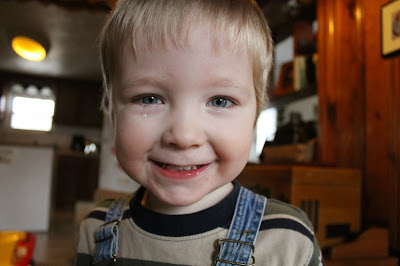 This is my son, Ben.  Smiley. Sweet. Sneaky. So darn squishy and huggable. And if you look closely, you'll see the tear in his eye. Ben has always been my weapy child, never too far from a frustrated meltdown of tears.  He bounces back quickly (as this photo demonstrates), but his tears are never far from the surface... until recently.

Almost exactly a year ago, we were referred to an allergist.  Ben had frequent facial rashes around his mouth, which I just assumed were eczema.  He can thank me someday for the sensitive skin.  The allergist recommended removing eggs from his diet, which was a bigger deal than you might think.  Custard, baked goods, salad dressings... they all have eggs or an egg by-product in them.  We faithfully removed the eggs and would know when we slipped up by the rash that would immediately form around Benjamin's mouth.

However, even when we had gotten really good at weeding out the eggs, Ben was still getting the awful rashes around his mouth.  I trekked back to the allergist (who is an hour away from our home) to see what else we should be avoiding, and he immediately suggested taking Ben off of milk and ALL milk products.

Doesn't sound so bad until you remember how many things have milk in them.  Like EVERYTHING.  Let's just review the basics: cheese (oh my word, do I love cheese), yogurt (a staple in our home), ice cream, sour cream, and butter.  Oh wait... butter is in every baked good known to man.  AND whey is in far too many breakfast cereals, crackers, breads, and boxed mixes.  While I initially looked at this milk allergy as a cooking-everything-from-scratch death sentence, I wanted to give it a try.

Just as an aside, the allergist told me that I might notice a difference in personality if Ben were really allergic to milk.  You see, the body of an allergic person reacts to the allergy-inducing foods as it would to a drug.  Kids with milk allergies often are described sleepy, dazed, foggy-brained, or lazy; but, in reality, they are living in a drugged state 24/7 due to the whey, cheese, yogurt, and milk that the food pyramid tells us we are supposed to be feeding them.

We came home and cleaned out the cupboards, putting all the foods containing whey aside so we could help Ben make good snack choices.  I changed our menu to more a whole-foods diet since we were going to need to know exactly what had been put into everything.  Might as well keep it simple and just have meats, veggies, fruits, and homemade breads.  Besides, no one feels like they are being deprived when they are eating a good spoon roll.  Amen??  In fact, just writing this sentence has caused me to get up and get myself a spoon roll.  Oh. so. good.

Two weeks went by.  Teacher Man and I were both eager to debunk this allergy because... well... we missed cheese.  And Ben cried at lunch when he couldn't have yogurt.  Poor little guy.

After about three and a half weeks, I was out doing errands with Ben and little Laura, when I noticed something was different.  Ben was talking.  Like non-stop, just like his mama, talking.  And it made sense.  And it was directed at me.  And he was waiting for me to answer him.  And when I did, he listened.  And when I gave instructions, he obeyed.  And when we had to leave the playplace, he was cool about it, understanding that we would come back another day.  Hmmm...

Every night at supper, everyone in our family shares his favorite part of the day.  Ben always wants to go first, but often says, "I forget," when we ask him and then he copies his brother's favorite part.  Every. night. That night, Ben would. not. be. quiet.  He shared all about his morning out with Mama in great detail.  I had never heard him retain information like that.  Poor Caleb. He had never had to share the airwaves at the dinner table before.  It took forever for Ben to share all of the details and for us to get to Caleb's favorite part of the day; but by that time, I was in tears.  I had just met my son.

I hadn't even realized the toll that Ben's spacey behavior had taken on me until that moment.  Suddenly I had a fully coherent child.  And it wasn't just his speech that changed.

The next day, Benjamin stepped on me.  If you know Ben, you know that he often uses his limbs in ways that are painful.  He's not being malicious.  He just flops around and really never notices when he's causing pain.  I cried out, "Ouch!  Ben, you hurt Mommy!" which normally would not even phase him, but immediately he looked right into my eyes with sadness and said, "I sorry, Mommy.  Are you okay?"  And then, he started moving more carefully and even sat in my lap gently to be sure he wouldn't hurt me again.  Never before had we been able to get through to him the need for gentleness and caution.  Suddenly, he got it.

The next day, he played with the same toy for over two hours.  Ben had always struggled to full engage with anything besides the television.  Board games were over for him after a couple of turns.  Not so any more.  He finished a board game with my Mom yesterday.  I cannot tell you how huge that is.

There have been WAY fewer tears.  WAY fewer tantrums.  And no wonder.  He's living with a lot less frustration.  He can think clearly.  Hear us clearly.  Wake up feeling rested.

It makes me think of when I am on cold medicine.  I feel fuzzy-brained, and I'm not being thoughtful of the needs of others.  I'm just trying to put one foot in front of the other.  I also eat more because I feel tired (this is totally Ben!).  And I'm more clumsy (totally Ben too!).  That's how it seems he felt when his body had dairy.

Our family loves Jesus.  That's who we are.  My kids are pumped about going to church any time the doors are open because of all the people there who show Christ's love to them so well.  Last Sunday evening I decided to do something brave.  Go to evening church.  There is no children's program during evening church, but it was the choir's Christmas program so I thought we'd give it a try.  Ben normally flops around in the pew, can't sit still, chews on things incessantly (including the pews), and cries.  It's a trying experience every time.  Halfway through the cantata that night, I started to cry.  Ben was sitting on the edge of the pew with perfect posture (he NEVER engages his abdominal muscles if he can help it), listening to every word.  He sat like that for forty-five minutes, hardly moving a muscle except to look up at us and smile because he loved the music.

This is not a scientific study.  It's just our family's experience, but it makes me wonder how many other children are out there, feeling dopey all the time because their bodies are reacting to milk products like normal peoples' bodies react to a strong drug.  I feel immeasurably blessed to have met my son.  To finally truly know the spunky, energetic, hilariously funny boy he was created to be.  It would be easy to beat myself up for not having figured this out earlier, but when I watch Ben (right now he's outside building a snowman with Teacher Man) all I feel is joy and excitement for the new world that has opened up to him.  And if I am ever having a pity party about my cheese-less existence, I only need to watch my son for a moment to realize that it is worth every extra step I take to keep him plugged in, alert, and whole. 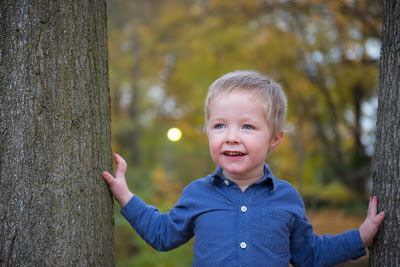